INVESTING IN YOUR FUTURE!

Living and working in the border region

Bulgaria and Romania are two neighbouring countries with a common border, formed by a river and a terrestrial part. The Danube valley forms the natural borderline, which starts from the mouth of the Timok River and ends in Silistra, representing more than 75% of the entire northern border. The terrestrial part crosses South Dobrudzha along the line Silistra – Cape Kartal. The Danube River, apart from being a natural border line, provides a waterway that connects Bulgaria and Romania with the countries of Western and Central Europe. After the construction of the “Rhine-Main-Danube” Canal (1992), the Rhine and Danube rivers had been connected, thus providing a river transport connection between the Atlantic Ocean, the North Sea and the Black Sea.

Bulgaria and Romania are connected through the ferry complexes built to connect the Towns of Vidin – Calafat, Oryahovo – Beckett, Ruse – Giurgiu and Silistra – Calarasi. Furthermore, a Danube Bridge 1 and a Danube Bridge 2 have been built across the Danube River, providing a direct railway and road connection between the two countries. In 1954, the first bridge built was opened to provide direct connection between the two Towns and the two countries - the "Friendship Bridge", i.e. the "Ruse – Giurgiu" Bridge. Two more towns are connected in 2013, after the construction of the “New Europe” Bridge to connect Vidin and Calafat. 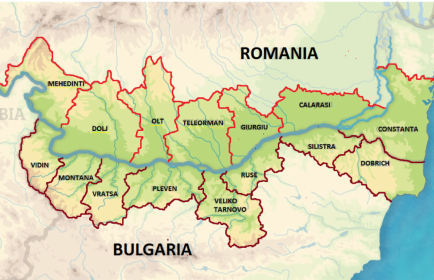 Besides the common border, Bulgaria and Romania share a common historical past; have similar natural and climatic conditions; always have a number of common interests as neighbouring countries. In 1991, the "Declaration of Neighbourly Relations, Friendship and Cooperation" had been signed in the City of Sofia. Subsequently, a number of bilateral documents had governed the relations between the two countries regarding the trade, cooperation, joint border control, customs cooperation, etc.. Traditionally, commodity exchange between the countries had been intensive, and in 2003 a Bulgarian-Romanian Chamber of Commerce and Industry had been established.

The two Balkan countries simultaneously joined the European Union in 2007, which favours the relations between them in order to keep developing in a positive direction, in particular associated with the assistance and cooperation in overcoming common issues. At the pre-accession stage, two financial memoranda with the European Union under the Cross-Border Cooperation Programme had been signed in 2001, 2002. Since then, the European Union has promoted the cross-border cooperation, focusing on various thematic areas related to the environmental protection, climate change, employment promotion and labour mobility, etc.

The physical scope of the programme covers a total of fifteen Districts and Counties forming the socalled ‘Cross-border region’ between Bulgaria and Romania. From the Bulgarian side, these are the eight regions, located on the northern border: Dobrich, Silistra, Ruse, Veliko Tarnovo, Pleven, Vratsa, Montana and Vidin, and on the other side – the seven counties along the southern Romanian borderline: Constanta, Calarasi, Giurgiu, Teleorman, Olt, Dolj and Mehedinti.

One of the most noticeable differences between the Districts and the Counties is in terms of their size - Population Number and Territory Size. Romanian Counties are significantly more populated and vast compared to the Bulgarian ones. However, similar demographic processes may be observed – depopulation, negative mechanical and natural growth, ageing, and lower levels of urbanisation compared to the average for the countries. Similarities and differences are also established in terms of labour market, economic profile, educational structure etc.. For the purpose of this Study, the general profile of each Districts and each County in the cross-border region was described in order to create awareness about the trends and processes at the administrative unit level.